On Thursday, March 20th the Meriam R. Hare Quaker Heritage Center of Wilmington College presented an opening reception for it’s two new traveling art exhibits: The Freedom Riders, and The Long March. The QHC also took out an in-house exhibit from 2008 called Beyond Birmingham. These three sets combine to create not only a world view of the Civil Rights movement, but a local view from citizens around our Wilmington community who impacted this pivotal time period.

Ruth Dobyns, curator for the QHC, planned for this exhibit out of awareness that this summer will be the 50th anniversary of the Freedom Summer. The Freedom Summer started in 1964 as an initiative in Mississippi to end the rigid system of segregation and it’s denial of  voting, equal education, and holding an elected office for African Americans. The legacy of the hundreds of summer volunteers who broke down Mississippi’s political boundaries 50 years ago were at the forefront of Dobyns mind as she curated the new exhibit. Dobyns and two student staff workers, Isaac Garrison and Bri Knisley described the process of bringing in the new exhibits. There was first the brainstorming process. After finding the two traveling exhibits , there was then the process of tying it all together. “Bringing out the “Beyond Birmingham” exhibit from 2008 really brings things back to home” Garrison explained. The installation took three days to print pictures, put displays together, and adjust proper lighting for the final exhibition.

“Freedom Riders” includes four free-standing panel displays of the incredible stories from men and women who defied Jim Crow Laws, segregation, and especially interstate travel legislation. From May through November of 1961, more than 400 people: black, white, young, old, male, female, secular and religious traveled together on bus systems to journey through the violent South. Despite two U.S Supreme Court decisions that ruled racial segregation in interstate travel as illegal, the south still back-lashed with racism, hostility, and violence. The Freedom Riders dedicated themselves to a commitment of peaceful protest for human rights and social justice. From the first bus ride of 13 volunteers, to the hundreds of people who traveled together to put their lives on the line- these people tell a story of change. This story is displayed through the description of the history, legislation, and the many faces pictured on each panel board. “I want to be one of those faces. These are young people our age who caused change” Bri Knisley described as she pointed out her favorite part of the exhibit as the side by side mug shots next to recent pictures of some of the arrested Freedom Riders. 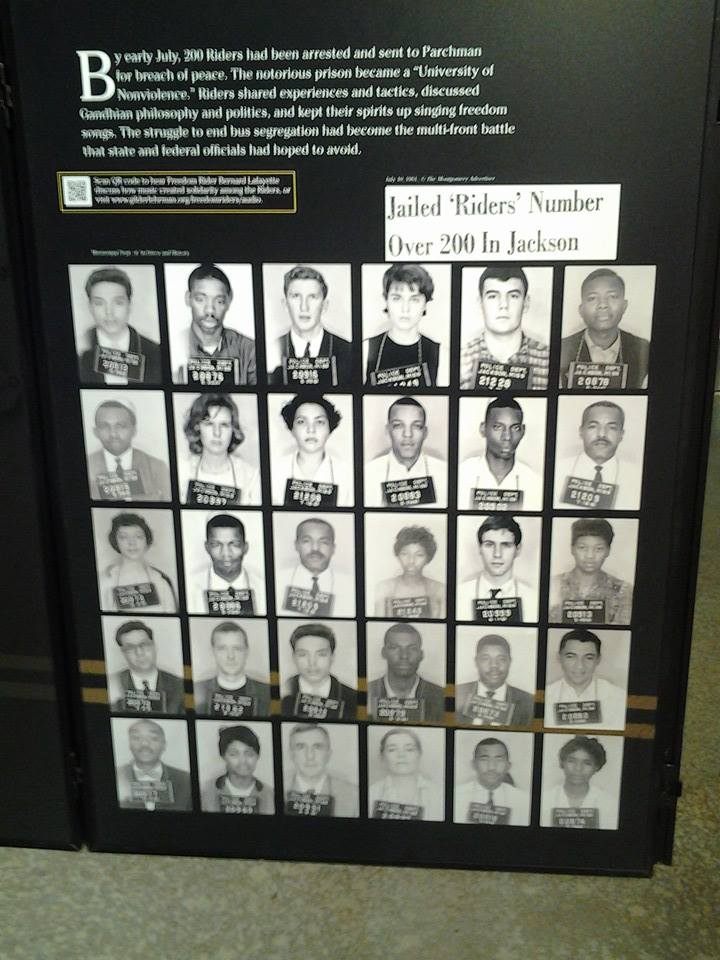 A local viewer of the exhibition on opening night also shared her story. “It is in my father’s memory that I come to events such as these. How he described to me of when he went to Washington and could hear Martin Luther King Jr.’s voice ring out over the entire mall- that is the memory I bring with me” Miriam Speaight, WC graduate of ’76 explained. She nostalgically spoke of her parents as hard working and dedicated to civil rights and peace. This inspiration moved her to attend the March on the Pentagon in 1967 to  protest against the Vietnam war- just six years following the peaceful protests of the Freedom Riders. As she grew up in the slums of Rochester N.Y, to later attending Wilmington College where she earned a degree in Agriculture and met her husband, she continued from there a Quaker lifestyle. “I am who I am. It is important to do your part” Speaight described as she looked upon the Freedom Rider pictures and told her life story.

The second piece called “The Long March” is one free-standing panel displayed in the center of the QHC. The piece from the Herb Block Foundation, commemorates some of the cartoon artists controversial cartoons during the Civil Rights Movement. Although he became the most honored cartoonist of his time, there was still racism and criticism out there against his cartoons. The display shows several pieces of his work along with a description of what each represent. The cartoon titled “Pray Keep Moving, Brother” focuses on the irony of segregation in churches that preached the “brotherhood of man.” 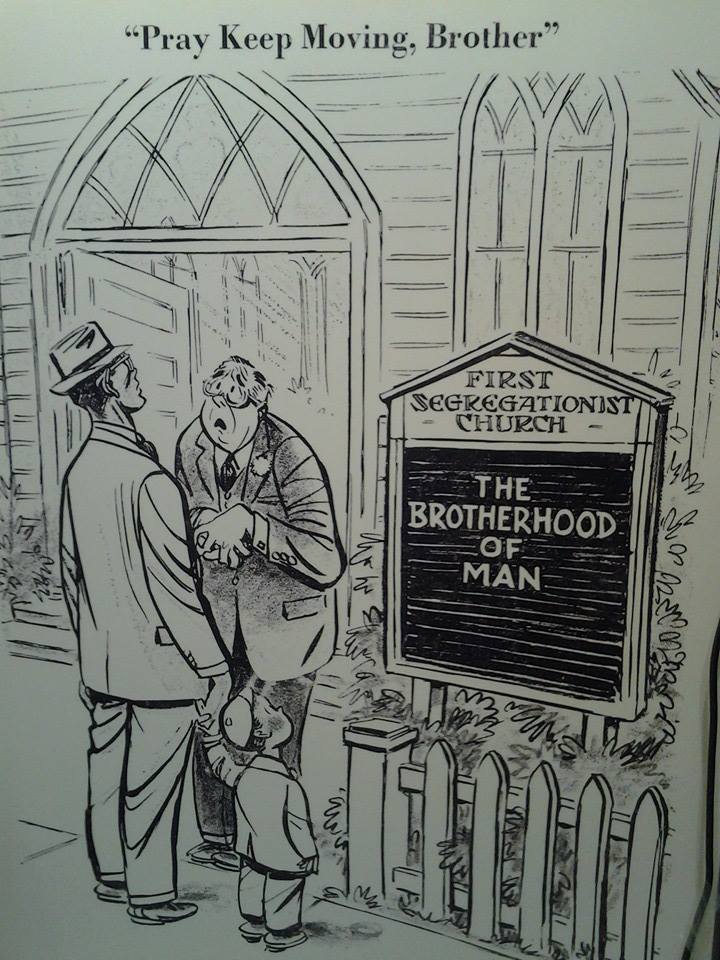 The final piece on display from the QHC in 2008 was “Beyond Birmingham.” Located along the walls of the Heritage Center are stories about Quaker roles in peaceful protest along with those of people from our own community. Before these pieces were originally presented, Dobyns sent out an all-staff email asking if anyone had personal stories or knew of friends, family, or relatives who would have stories about their involvement in the Civil Rights Movement. This piece of the exhibit shows what Dobyns found as she received stories from professors Don Chafin, Gloria Flaherty, and others of Quaker’s contributions to the movement.

A follow-up movie will be presented at 7:30 p.m at the QHC on April 15th. The exhibit will be up until April 16th and regular gallery hours are Mon-Fri 9a.m to 4p.m. There are also “I went to the QHC” cards that can be filled out at the end of one’s experience to relate comments or inspiration back to the staff of the Heritage Center. More information can be found on facebook at facebook.com/QuakerHeritageCenter or on the home page www.wilmington.edu/qhc. The QHC encourages students and staff to come see the faces and read the living stories of people from the Civil Rights movement.“This is a living exhibit; these stories continue to grow and change our world every day.” described Garrison as he explained that this was his last gallery before he graduates and departs from WC. “Come to see all of the faces of just how many people it takes to create social change. People are so used to seeing MLKJ, Rosa Parks, and Malcolm X when they see or hear of the Civil Rights Movement. It is the little actions from every day people that leads up to real change” Dobyns related as encouragement for staff and students to view the exhibition.

“ Our minds, souls, and hearts cannot rest until freedom and justice exist for all people” John Lewis- The March on Washington (1963).